Mountain Lions on the Edge 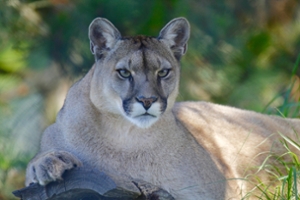 Can city dwellers and wildlife coexist safely and peacefully? University of New Mexico School of Architecture and Planning graduate student Sophia Thompson is convinced they can and she is examining one facet of the issue with her research project called Mountain Lions on the Edge: Integrating Conservation into Urban Planning through Predictive Modeling.

As cities expand they sometimes encroach into land that was once inhabited only by wildlife. When this happens, humans can find themselves face to face with the original wild inhabitants, who need the space to meet their own needs: finding food and water, and raising their young. Cities grow before those migration corridors critical to wildlife survival are identified and preserved.

The problem is nationwide. Coyotes live in Central Park, to the dismay of New Yorkers. P-45, a puma living in the Santa Monica Mountains of southern California, has killed livestock and pets. Bears raid Albuquerque bird feeders and trash cans when their normal diets of berries, fruit, and nuts in the wild are diminished by drought. Climate change and urban sprawl exacerbate the challenge for these animals to find habitable territory. In Albuquerque, animal welfare agencies received 40,000 calls about wildlife crossing into human territory in 2016.

Thompson is currently using facilities and resources at the UNM Center for Advanced Research Computing to do research on New Mexico mountain lions and the territory they occupy and require, with the eventual goal of helping humans and wildlife coexist.

According to Thompson’s project summary: “Top predators like mountain lions, considered keystone species, are integral to maintaining healthy ecosystem. If a predator learns to live off human communities and become habituated (often seen in bears), they are considered problematic and are euthanized. If cities could be built in a way that acknowledges and maintains natural corridors while preventing predators access into the city, habituation and euthanasia could be avoided and ecosystem health through predation maintained.”

With the aid of CARC applications scientist Dr. Ryan Johnson, Thompson plans to use the center’s computers to analyze tracking data from four collared mountain lions currently being studied in the Sandia and Manzano mountain ranges, along with aerial images of the complexity of the terrain.

The stitched-together aerial photos will show cliffs, slopes, streams, meadows, boulders, arroyos, and other landscape features of various heights. The tracking data gleaned from their collars will provide a snapshot of what habitat the lions prefer to traverse, as well as what they avoid.

Thompson thinks she can prove that the big cats prefer certain landscape features and city planners can use the patterns and characteristics of these landscape preferences to change the development pattern of neighborhoods adjacent to territory where wildlife lives.

So why not just do what cities have been doing all along: relocate or euthanize predators who venture too close?

From a conservation standpoint, this is terrible, Thompson said. When large predators are euthanized, the population of other potentially pesky wildlife such as rodents, deer, skunks, and coyotes can get out of control. Risk of disease rises. Relocation can be ineffective as animals such as bears and mountain lions will often try to find their way back across busy highways and neighborhoods, or be placed in another animal’s territory, leading to a deadly struggle for possession. Survival rates among relocated animals are low.

With the information Thompson hopes to find, city planners could create an urban buffer zone that funnels predators from one habitat to the other for food, water, and raising young, without increasing contact and issues with human neighbors, a win-win situation for city residents and wildlife.