Powerful CARC system gets a name 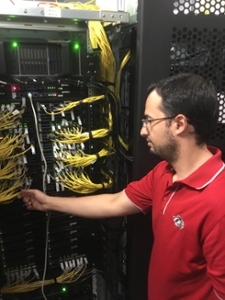 A new computing system donated to the Center for Advanced Research Computing (CARC) from Los Alamos Laboratory (LANL) will be the largest system at of New Mexico. In keeping with its size and its northern New Mexico provenance, the powerful new computing system will be called Wheeler, named after the state’s largest mountain peak. When fully deployed, Wheeler will have 228 nodes, each featuring two quad-core 2.66 GHz Intel Xeon 5550 CPUs and 48 GB of memory.

Wheeler is being deployed in two and replaces multiple prior CARC systems. The first phase, which is nearing completion, replaces the Metropolis and Pequeña systems that previously supported high-capacity computing at CARC with 144 Wheeler nodes comprising 1158 cores and almost 7 terabytes of RAM. The second phase, to be completed Fall 2017, will double the size of the system and replace the CARC Ulam supercomputer and expand Wheeler to support approximately 20-trillion math operations per second (25 Teraflops).

The new system is five times more powerful than the combined computing power of the four machines it is replacing, said CARC interim director Patrick Bridges. The machine was acquired from LANL through the National Science Foundation-sponsored PR0bE project, which is run by the New Mexico Consortium. The NMC, comprising UNM, New Mexico State, and New Mexico Tech universities, engages universities and industry in scientific research in the nation's interest and to increase the role of LANL in science, education, and economic development.

For information about using CARC for your research needs, visit CARC user support.