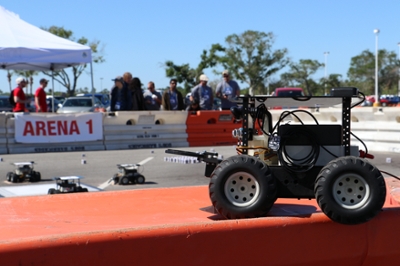 A robot on Mars is part of a typical science fiction movie about space exploration. But NASA and a team of University of New Mexico researchers have teamed together to take the fiction out of sending robots to Mars. NASA recently hosted a Swarmathon event, the brainchild of Melanie Moses, associate professor of computer science at UNM, who developed the competition as a way to involve students in programming and computing and prepare for a human expedition to Mars. Moses and her fellow researchers use resources at the Center for Advanced Research Computing to prepare the robots (photo right) for competition.

More than a dozen faculty and students from UNM’s Department of Computer Science traveled to Kennedy Space Center in Florida April 17-19 for the third annual NASA Swarmathon. The UNM team develops the basic software and designs and builds the robots, known as Swarmies, that are used in the competition and works with NASA at Kennedy Space Center to set up and run the competition in Florida each year.

As an organizer, UNM didn’t field a team but attending from the state were Central New Mexico Community College, Navajo Tech in Crownpoint, and Southwestern Indian Polytechnic Institute, which took second place in the competition, winning a $3,000 cash prize. SIPI has placed in the top three all three years the Swarmathon has been held. UNM graduate student Sarah Ackerman ran a high school edition that included New Mexico high schools.

The robots are programmed to work together like a colony of ants to complete various tasks. At the competition, they collect cubes marked with bar codes. On Mars, their teamwork would be crucial to survival of the first humans to arrive there.

NASA is interested in having swarms of robots go in advance of human missions to Mars and the moon to collect minerals or water that can be converted into hydrogen and oxygen for fuel. To that end UNM organizes a competition with NASA to see which colleges can design the best resource collection algorithms, explained Matthew Fricke, technical lead of the UNM Swarmathon group and research assistant professor at the UNM Department of Computer Science.

“College teams that enter the competition, such as SIPI, take the robot hardware and software we provide and improve it to solve a resource collection task. So, they do not have a relationship with the UNM team beyond the support we provide all the competition entrants,” said Fricke. “UNM takes the innovations developed by teams’ competition, as well as our own research into resource gathering to produce better algorithms for NASA. We use CARC to perform large scale tests of those algorithms in simulation.” 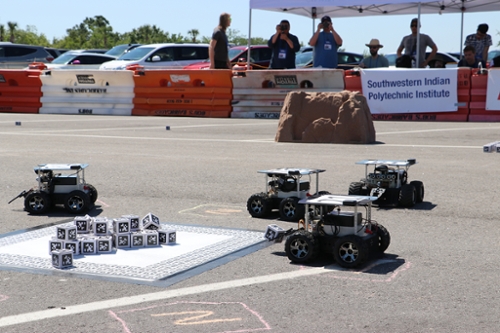 Simulations allow researchers to test a network of robots without having to build a huge fleet of them. Moses said CARC has been greatly beneficial to Swarmathon program, allowing them to run millions of scenarios with dozens or even hundreds of robots in a swarm before implementing the programming algorithms into the Swarmie hardware.