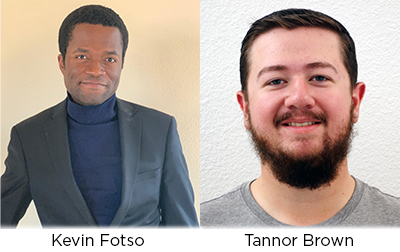 The University of New Mexico’s (UNM) Center for Advanced Research Computing (CARC) welcomes two new staff members to support UNM researchers with using the CARC high performance computing (HPC) systems. Kevin Fotso and Tannor Brown will play lead roles in working with researchers from the College of Arts and Sciences to identify, design, and implement their research computing needs. “We are the bridge between researchers and CARC, especially if they have not used CARC before,” Brown explains.

Researchers often conduct experiments which produce vast amounts of raw data. This creates the need to find a way to efficiently analyze that data. Time is particularly important to researchers, especially when they are working on time-limited grants. This is where CARC’s HPC systems and Fotso and Brown come into play. Part of their job is to help researchers decide if it would be more efficient to run the data on their own computers, or to connect to CARC’s HPC systems and run their data on potentially hundreds of processors simultaneously. If they decide to use CARC’s systems, Fotso and Brown can help them connect. This way, researchers can obtain their results much faster and much more efficiently having spread the processing across multiple computer systems.

Fotso elaborates, “Time makes a big difference in someone's research. If they have to run an experiment that is under a two-year grant, [they need to] finish the experiment in maybe in a year or year and a half so they can start writing their paper. So, if one experiment takes a month [to run], that is a lot of time. By doing HPC processing we can accelerate that time to one or two days. That is the kind of thing we take pride in. We can see the researcher’s progress and the researcher is happy, and we are happy.”

Fotso and Brown will specialize in all aspects of Linux-based computing platforms. They will also aid researchers in installing and maintaining off-the-shelf and custom software packages, as well as helping researchers design and debug complex research workflows. Additionally, they will manage and install common research programming languages such as Python, R, and C/C++. They will also manage licensing support, license servers, and investigate compliance issues related to research software and data.

Brown joins CARC from the College of Arts and Sciences where he worked as a Technical Analyst. His Bachelor’s degree is in Management Information Systems, and he is in his second year of the Master’s program in Cybersecurity and Business Analytics at UNM’s Anderson School of Management. “I am glad to be finally going into HPC computing. That is the path I have been wanting to take for a while and I am glad the opportunity came up for this position … so I can continue to learn [and support] research and different faculty needs," remarks Brown.

Fotso’s Bachelor’s degree is in Biomedical Engineering from the Illinois Institute of Technology and his Master's, also in Biomedical Engineering, is from UNM. He is currently working on his PhD at UNM with a research focus on multiple sclerosis and building models to predict disability and lesions in the brain. He has a background working with Magnetic Resonance Imaging (MRI) images to establish how water diffuses in the brain as detailed in his paper: Diffusion Tensor Spectroscopic Imaging of the Human Brain in Children and Adults. Last semester, Fotso worked as a Graduate Assistant at CARC dealing with help tickets and contributing to CARC’s help documentation on GitHub. QuickBytes features a series of tutorials on how to use specific software on CARC systems. Fotso concludes, “I've loved this job since Day One, I never loved a job like I love CARC.”

When contacting Fotso and Brown you can expect a quick response, usually within two business days. “Our job is about answering well and trying to help the user as fast as possible with their research,” states Fotso. Arts and Sciences researchers needing help can create a CARC Help Ticket or email to request support.