A collaboration between Los Alamos National Laboratory, the University of New Mexico Department of Computer Science, and the Center for Advanced Research Computing is helping the lab improve a program called Higrad/FIRETEC, as well as preparing students for careers in scientific research. The computer program is designed to simulate wildfire behavior. Researchers and students using CARC have joined the LANL effort to optimize the program to run on the latest supercomputer technology. 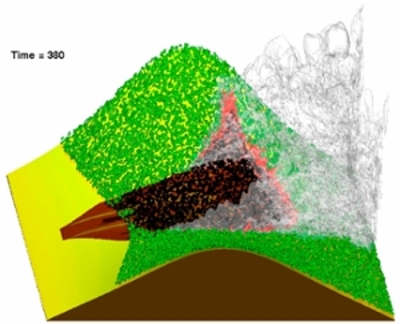 Understanding wildfires is a difficult scientific problem because of the vast range of factors affecting the phenomenon. Higrad/FIRETEC analyzes and models complex interactions between factors such as vegetation, weather, winds, pest infestations, and topography to simulate wildfires. The goal is to improve predicting wildfires and preventing loss of life, property, and natural resources, as well as preparing firefighting personnel for dangerous situations.

Higrad/FIRETEC has been around for several years, but the technology has evolved. Researchers at CARC are examining and evaluating the code to make improvements that would allow the code to run at optimum levels on the newest technology, according to CARC Director Patrick Bridges, who is also a UNM Computer Science Professor. Higrad/FIRETEC comprises millions of lines of code and requires vast computing resources. Research at CARC is exploring the complex program using mini-applications, developing simplified versions of key elements of the code, and running these samples on CARC systems instead of crowding LANL resources.

“Various labs and groups will develop simplified versions of their codes. If you can make this run better on these systems we can then use those techniques in the full application,” Bridges said.

The collaboration not only benefits UNM students, but the state as well.

“It’s a good place for students to start,” Bridges said. “Sometimes it’s difficult to get started. This gives them hands-on real experience. They can grasp the full idea and gain more experience.” This enables students to prepare for internships and summer classes at LANL and other national labs.

“Labs are looking for knowledgeable and talented students when they graduate. It benefits the research but also prepares a workforce that can stay in New Mexico. That’s hard to find,” he explained.