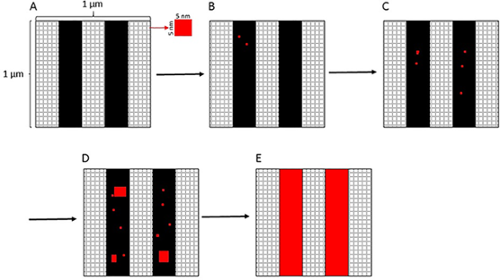 Candida albicans is the most common viral pathogen and causes candidiasis, an infectious disease of the lungs and other organs. Healthcare costs associated with treatment of candidiasis exceed $1 billion annually in the US alone. Candida albicans can mask itself so pattern recognition receptors in the human body cannot detect and destroy it. Researchers are trying to understand this masking process, eventually leading to better treatment.

“Like the Lone Ranger, the masked man, the masked virus in this case, Candida albicans can hide itself from the body’s immune system,” said University of New Mexico Health Sciences mathematician Dr. Michael Wester. Wester works at the Department of Physics and Astronomy and the Center for Spatiotemporal Modeling of Cell Signaling. Other authors of the research publication A computational model for regulation of nanoscale glucan exposure in Candida albicans are researcher Dr. Jia Lin and Professor Aaron K. Neumann of the UNM Department of Pathology.

Candida albicans is part of the natural microorganisms living in or on the human body. Its species name, albicans, comes from the Latin word for "white." The yeast appears white when cultured on a plate and, in the case of certain infections like thrush, it can create white patches.  It can be found in the gastrointestinal tract, skin, mouth, and other parts of the body. Most of the time it causes no issues, but it is the most prevalent cause of fungal infection, candidiasis, in people when it gets out of control. It can cause something as simple as a baby’s diaper rash or as dangerous as in an infection of the blood, lungs, or lining of the heart. Candidiasis is treated with a variety of antifungal medications.

Candida albicans hides itself with a layer of glucan, concealing what the receptors are looking for to attack it – like shutters over a window, Wester explained. Various drugs can help to unmask it, breaking up the layer that helps it hide and allowing the body’s immune system to go to work.

“If you can break down the layer of glucan and then allow the receptors to recognize it, you can treat the disease better,” he said. Wester and his team looked at understanding mechanisms that make this process happen.

“CARC has good fast machines, a better operating system that makes calculations easier and faster. Otherwise the models would be painful to run on a laptop,” Wester explained.

“No one had ever done any modeling of this glucan unmasking. We are the first. We hope we can stimulate people to do their own modeling and come up with their own ideas.”

"There’s a fungus among us,” Wester joked. “It’s really true. There are all kinds of spores in the air and stuff in our bodies. All of us can get infected so any research may have wide ranging implications.”

Above: The figure shows a typical computational model of Candida albicans unmasking.